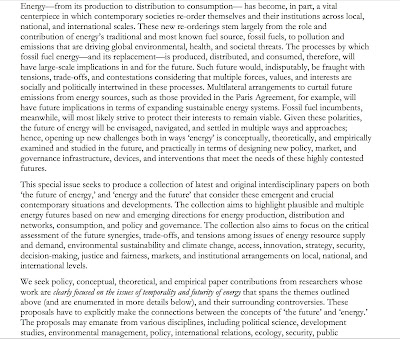 Call for Papers for Energy Research & Social Science, special issue on Energy and the Future.

I (together with various co-authors) submitted three article proposals to a special issue of the journal Energy Research & Social Science at the beginning of the year and I wrote three blog posts about the proposed articles (#1, #2, #3). The topic of the special issue is "Energy and the Future" and there were five "themes" to choose from. All my submisison were aimed at one particular theme, "Ways of thinking about the future of energy" and the editors wrote that "About 3 to 5 papers per theme will be selected for this special issue". That means their expectations were to select somewhere between 15-25 articles and back in January I wrote:

"I think it's a pretty certain bet that not all three of these proposed articles will be invited to the special issue... I would be happy if one is accepted and I would be delighted but overworked if two are accepted (luckily I'm the second rather than the first author of all three proposals)"

As it turns out, they were inundated with proposals and "received 85 abstracts of excellent quality and high standard". For better of for worse, all three of my proposals were invited to be extended into full papers. Which means I have had a very very hectic time lately with this past week being particularly crazy.

Quite some things have changed since we handed in the proposals two months ago though. Of the three proposals, two papers have been written up as short rather than full papers and instead of me being the second author of all three papers, I am now the first author of one of the papers. The titles of two of the articles have also changed since back in January.

Since the review process is double blind, I don't want to write too much about the evolving texts at this point. I will for example not publish the current abstracts on the blog, nor the current titles as I have taken a step back from the "tell-all" culture I have had before on the blog (a policy I wrote about back in September when I handed in three submissions to the CHI conference).

I have in fact also gone back to my previous blog posts and temporarily anonymized my co-authors' names as changed the title of one of the articles. All this is to make this work-in-progress slightly less Googleable. Despite the hush-hush, I still wanted to write this blog post. Since the deadline for this special issue is the number one thing I have worked on during the past week(s), it would be strange not to mention it at all on the blog. This blog post also commemorates all the hard work that me and my co-authors have put into these texts this far as well as the success of having had all the three proposals be invited to the special issue.

If all goes well, I will again have a lot to do before May 1 (second draft manuscript submission) as well as August 1 (final manuscripts due).