.
This is blog post number 300 since the start of this blog. Exactly a month ago the blog celebrated its 4th anniversary - the very first blog post was published in the beginning of September 2010 - 49 months ago on this day. One year ago, with some advance planning, I managed to synchronise the third anniversary to the 200th blog post in the beginning of September. That means I have published no less than 100 blog posts in the last 13 months, or, 7-8 blog posts per month in average.

I have, over time, increased the tempo of publishing; from around 50 blog posts during the first year (Sept 2010 - Aug 2011) to around 75 during the second and the third year and now to over 90 blog posts during the last year (Sept 2013 - Aug 2014). I don't think it's possible for me to go any higher than that; my goal has since the very start been to publish at least one and at the most two blog posts every week. I did have a "blog week" last year though when I published a new blog post every day. A year ago, blog post #200, I wrote:

"Looking at the number of unique visitors to the blog, as many people had visited the blog between January and May [of 2013] as in all of 2011 and just a few weeks ago, in mid-August, I had had as many visitors this year as in all of 2012" 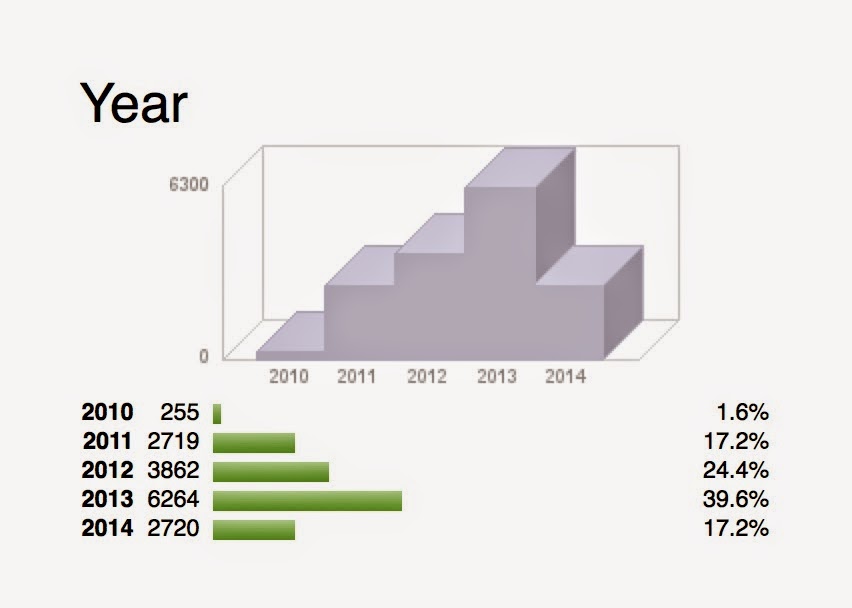 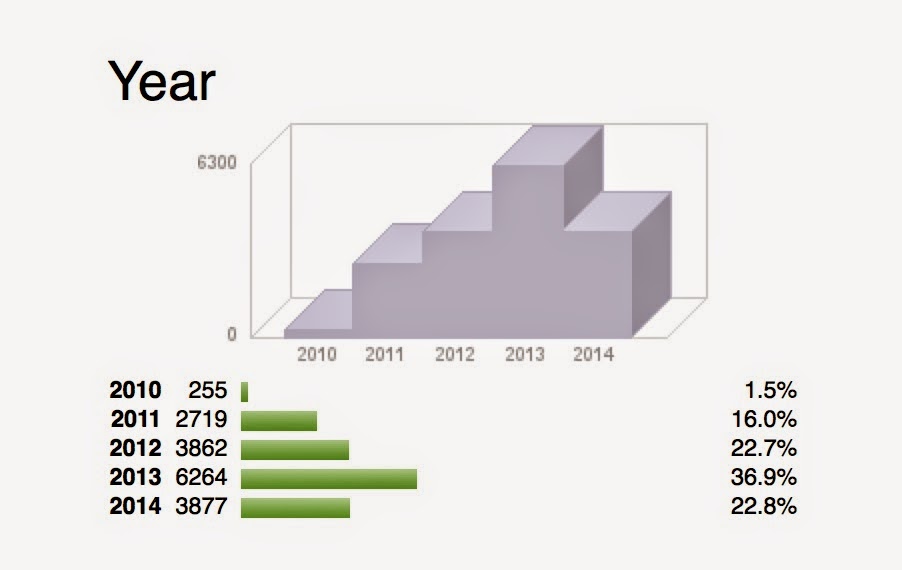 Within a week from now the blog will surpass the number of unique visitors from last year (2013). Part of the increasing number of visitors depends on an increasing the number of blog post, but the larger part is due to the blog becoming more popular. While I can see how many persons visit and read the blog, I have little idea of exactly who reads it and why. Since it's becoming exceedingly unusual for people to comment on blog posts, I have become too wise to ask who is reading this blog post in a blog post! This is the 64th blog post this year and only five of the preceding blog posts (8%) have garnered any comments at all... 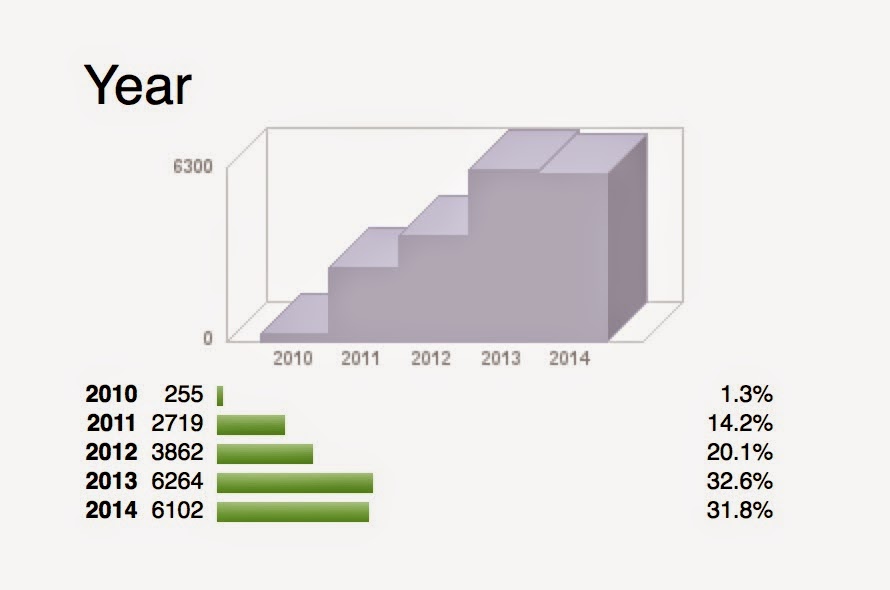 The number of unique visitors to the blog is slated to pass the total figure for 2013 within a week.

I try to find an angle and write about something new in these texts about the blog itself. This time around I decided to make a small inquiry into the volume of my production of text here on the blog. I took three months from the last 12 months as samples; Jan 2014, May 2014 and September 2014. The number of blog posts during these three months are very much in line with the average (8, 8 and 7 blog posts). I then pasted all the text from these 23 blog posts into a document and the sheer volume of text came out at more than 37.500 words. I usually equate 400 words with one page of text and that means I produced no less than 95 pages of text during these three months. If the volume is in line with what I write also during other months (it should), it have thus written and published somewhere between 350 and 400 pages of text on this blog during the last 12 months!

That's a lot more than I thought - even if some of the "text produced" might be quotes from a book, from an invitation to a seminar or a workshop, or perhaps a list of references to articles I have read. Still, it makes me wonder if the whole effort of writing this blog to some degree is misplaced? Should I perhaps spend less time documenting what I do and spend more time doing it? Or is writing these (apparently) long blog posts on the larger whole a good allocation of my time and my energies?

I lean towards the latter since I have found that the blog is so immensely useful for myself. I will for example meet my boss and discuss ("negotiate") my salary a few weeks from now. All I have to do is to look through the blog to remember what I did during the last year and find arguments that I can bring with me to that talk. It's also pretty great to just document what I do since it's so easy to forget the actual work done (and the ideas thought) as time - days, weeks and terms - pass by. I'd say that when it comes to this blog, I'm my own greatest fan!

Hopefully I'm not the only fan though! There ought to be some more people who have read this text this far for example. When I go back six months in time, I find that of the 20 blog posts I wrote during the period from February to April this year, only one has has less than 100 unique visitors and two of the blog posts have actually had more than 700 unique visitors. (That would easily have gotten these two blog posts onto the top 10 most read blog posts back in January this year.)

I'm not really sure what it is that people like about the blog - perhaps the rising numbers are just an effect of Google liking this blog and sending people over here when they search for stuff(?). Having readers (even anonymous readers) is gratifying though and I plan to continue to write a minimum of one and a maximum of two blog posts per week - so see you around!
.
Upplagd av pargman kl. 09:50