How Sweden can use digitalization for sustainability (symposium) 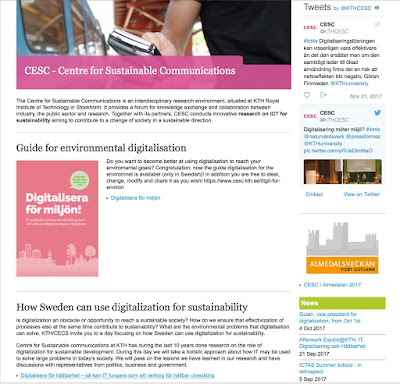 I have been affiliated with a research center, The Vinnova Centre of Excellence for Sustainable Communications (CESC) during the last five years. I have in fact sat in the "CESC corridor" during the last two years and have thus rubbed shoulders with colleagues who are sustainability specialists and who organizationally belong to the KTH School of Architecture and the Built Environment (while I belong to the School of Computer Science and Communication). The 10-year center has had its run though and it will close its doors at the end of the year.

As part of the activities of closing down the center, CESC organized a one-day symposium a little more than a week ago on "How Sweden can use digitalization for sustainability". My presence was required since I both work at the center and also belong to the CESC management group ("ledningsgruppen"). As it so happens, I also helped the center director Mattias Höjer as a sounding board in the process of planning the symposium.

The day was divided into two parts; a morning session and an afternoon session (followed by a dinner). The morning session consisted of (yet another) ConverStation exercise. I've participated in and have written about ConverStations several times before on the blog - most notably a year ago - and won't explain the mechanics of this interesting presentation format again. It's enough to state that there were 12 ConverStations and I manned one of them together with my colleague Cecilia Katzeff. We gave the same presentations three times for a limited number of persons and there was plenty of time for questions in an intimate setting. Our presentation was called "Can data from the grocery store push customers towards more environmentally friendly purchases?". My colleague Elina Eriksson sat at a nearby and presented "How do we educated ICT engineering students about sustainability?" - a ConverStation I could easily have joined her at had I not already been occupied. I think the ConverStation exercise worked very well and CESC (especially Mattias Höjer and Daniel Vare) has by now extensive experience at organizing them.

A long lunch/mingle was followed by a number of shorter session with many prominent guests, including the current minister of digitalization, Peter Eriksson. The afternoon session was opened by the Center for Sustainable Communications director Mattias Höjer and was closed by the chairwomen of the board, Catherine Karagianni (from Telia).

I notice that the UN Sustainable Development Goals (SDGs) are everywhere nowadays and they appeared many times over in the afternoon presentations (and perhaps also in various ConverStations).

The program and quite a few of the (ConverStation) presentations can be found here (for the most part in Swedish though).


The fact that the center will close its doors at the end of the year means that we will all move back to our respective departments. I will miss my CESC colleagues and our great conversations over lunches and coffee breaks! I would have moved back to my department at the beginning of 2018 had it not been the case that I will go on a sabbatical for half a year so I will instead do my best to stay clear of KTH until the the end of the summer. I will naturally write more about my plans and about my doings during the spring term later, but I can already now hint about plans for writing a book...
.
Upplagd av pargman kl. 00:05