The Internet at the eco-village 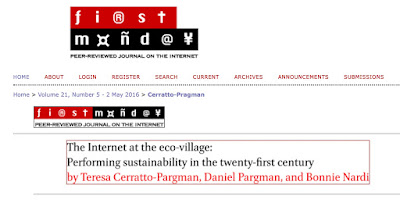 It's been a long time coming but our article "The Internet at the eco-village: Performing sustainability in the twenty-first century" has finally been published. The good news is that it is published in "First Monday" (a monthly peer-reviewed open access academic journal covering research about the Internet) and it is available for anyone anywhere to read. The article abstract can be found below. Our article was in fact published in their 20th anniversary issue:

"First Monday is one of the first openly accessible, peer–reviewed journals solely devoted to research about the Internet. First Monday has published 1,561 papers in 240 issues, written by 2,171 different authors. The May 2016 issue marks the 20th anniversary of First Monday. The first issue appeared two decades ago on the first Monday of May 1996 on a server in Copenhagen, coinciding with the opening of the International World Wide Web Conference in Paris."

I'm the second author of the paper and the first author is my wife, Teresa Cerratto-Pargman. We have also worked with Bonnie Nardi who is the third author of the paper. We met and got to know Bonnie during our sabbatical at UCI two years ago. We have, on and off, worked with the paper during the last two years but it is in fact Tessy, the first author, who has done the major part of the work.

One thing that is interesting - a strength as well as a complication - is the fact that two of the authors (me and my wife) have been involved in the establishment of the ecovillage in question. From the methods section of the paper, one of the four methods for data collection has been (some variety of) "participant observation".

"Two of the authors have been involved in the development of the eco-village since it was founded in 2009. One of the authors is currently a member of the economic association. While they have not been the most active of members, their observations and personal experiences underpin our understanding of the eco-villages’ vision, organization, principles and practices."

The other methods were 1) a survey, 2) analysis of key policy documents and 3) analysis of the 850 messages that were sent on a distribution list during 11 months. The paper is most clearly related to Lisa Nathan's "Ecovillages, values, and interactive technology: Balancing sustainability with daily life in 21st century America" (2008) and perhaps also Maria Håkansson and Phoebe Senger's "Beyond being green: Simple living families and ICT" (2013, pdf).

I am especially happy with my late-in-the-game contribution to the analysis which was written in response to reviewers' comments:

"For Ekoby, [many] topics that potentially could be framed in terms of “sustainability” lie in the shadows. They are not thought about or discussed. ICT is one. We have referred to it as an “ideological blind spot” elsewhere in this text. There are other blind spots that are not problematized or discussed at Ekoby as well ... Ekoby constructs a normality of its own, where some areas and topics are intensely discussed, while others go unnoticed or are ignored. We have shown that digital technologies play an important role for producing cohesion, coordination and strategizing at Ekoby. ICT technologies and the Internet can be represented as the “pinnacle” of industrial civilization and thus vulnerable to exactly those changes that Ekoby members worry about and prepare for. Despite this, Ekoby members apparently do not notice, or they discount or deny the impact of their communication and information practices on the environment and the implications of their reliance on these tools. As a consequence, alternative ways of using ICTs in the eco-village did not seem to be on the list of changes deemed necessary to construct a more resilient community and a more sustainable way of living.

It is possible to analyze this stance in terms of “oversight” or “denial”. In her book Living in denial, Norgaard (2011) discusses the reactions of residents in a rural Norwegian community after the unusually warm winter of 2000–2001. While residents were highly educated, they perceived the phenomenon of global warning as both undeniable and at the same time unimaginable. Norgaard analyses their behavior in terms of “socially organized denial” — global warming is accepted, but it is still disconnected from residents’ everyday practices and everyday lives, despite having large effects on the local economy. We imagine that Ekoby members either are unaware of the connection between their use of ICT and sustainability, or alternatively, that ICT is so very useful in their everyday lives — including in their roles as Ekoby members — that they consciously or unconsciously have chosen not to think about it and “live in denial”."

Is the digital infrastructure and its footprint an ideological blind spot for recently emerging ecological communities, including eco-villages? This paper examines how a group of people who are concerned with environmental issues such as peak oil and climate change are orchestrating a transition toward a more sustainable and resilient way of living. We studied a Swedish eco-village, considering how computing in this community contributes to defining what alternative ways of living might look like in the twenty-first century. Drawing on a social-ecological perspective, the analysis illustrates, on the one hand, that the Internet, along with the digital devices we use to access it, capitalizes and mobilizes values, knowledge and social relationships that in turn enhance resilience in the eco-village. On the other hand, the analysis shows that an explicit focus on ecological values is not sufficient for a community of individuals to significantly transform Internet use to conform to ecological ideals. This work contributes to a deeper understanding of the imbrication of social technologies with practices that are oriented to perform sustainable and resilient ways of living.
.
Upplagd av pargman kl. 19:53