Limits to the Sharing Economy 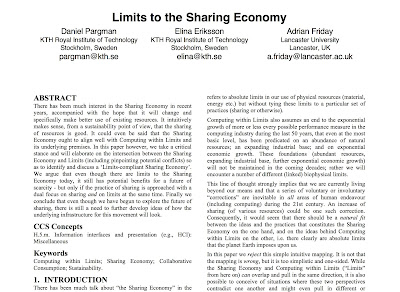 We recently submitted the camera-ready (i.e. final) version of our paper "Limits to the Sharing Economy" to the second "Computing within Limits" workshop. The paper is written by me, Elina Eriksson and Adrian Friday (Lancaster University) and it will be presented next month.

In the paper we basically point out that everything that glitters is not gold. The Sharing Economy (Collaborative Consumption etc.) glitters. We are especially interested in to what extent and how the sharing economy can be compatible with, and can lead to (environmental) sustainability - or not.

This is the second spin-off project from the (rejected) EU application* we handed in a year ago, the first being the paper that Karin Bradley and me wrote half a year ago, "The sharing economy as the commons of the 21st century". Do also have a look at the blog post I just wrote about two seminars I recently attended on Collaborative Consumption.

The process for writing the paper has really been very smooth. It is really easy to write papers with the combo Google docs + Skype. Below is the paper abstract:


There has been much interest in the Sharing Economy in recent years, accompanied with the hope that it will change and specifically make better use of existing resources. It intuitively makes sense, from a sustainability point of view, that the sharing of resources is good. It could even be said that the Sharing Economy ought to align well with Computing within Limits and its underlying premises. In this paper however, we take a critical stance and will elaborate on the intersection between the Sharing Economy and Limits (including pinpointing potential conflicts) so as to identify and discuss a ‘Limits-compliant Sharing Economy’. We argue that even though there are limits to the Sharing Economy today, it still has potential benefits for a future of scarcity - but only if the practice of sharing is approached with a dual focus on sharing and on limits at the same time. Finally we conclude that even though we have begun to explore the future of sharing, there is still a need to further develop ideas of how the underlying infrastructure for this movement will look.


As to rejected EU applications and the increasing absurdity the current system of applying for research funds, please see the linked articles.
Upplagd av pargman kl. 20:38