A blast from the past

.
While looking for something completely different on the Internet, I came across this picture of me: 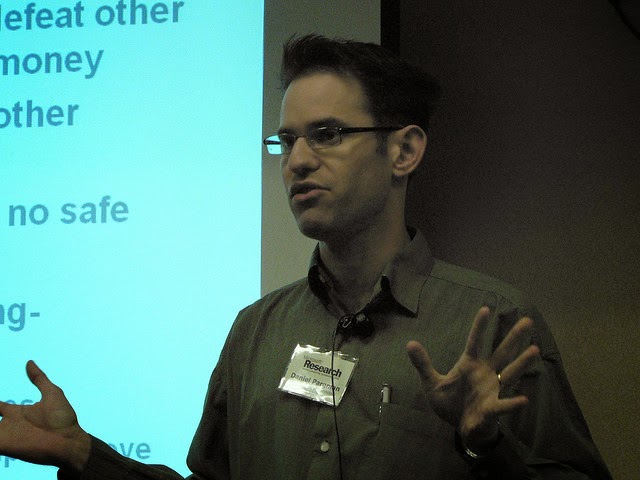 I snooped around some and realised that that photo came from the Microsoft Social Computing Symposium that I attended back in May 2006. I've been on a sabbatical at UC Irvine this spring and my half-year long stay at Microsoft Research (MSR) during the second half 2007 (one year after the photo was taken) was my one and only previous sabbatical. (As an aside, it for sure won't take another 7 years until we go on a sabbatical again!). My presence at the 2006 symposium was perhaps to some extent MSR's way of getting a feeling for who I was(?) - but I just don't remember the details of this-and-that (e.g. the connection between my presence at the invitation-only event in 2006 and my stay at MSR 15 months later). After all, all of this happened almost 8 years ago.

I did however find a 7-minute long video where I give a high-speed, high-content talk about "mobil/pervasive social computing" and here it is! The talk builds especially on Martin Bjerver's excellent master's thesis on the long-ago defunct game "Botfighters". The thesis is called "Player behaviour in pervasive games - using the city as game board in Botfighters" and it's available online (abstract, full text).


Wow, that was a long time ago! My two sons who today are 10 and 7 years old were 3 and -1 back then. Also, my current all-encompassing interest in sustainability wasn't even on the map back then - the starting point for that turn-around happened two years later, in 2008.

This whole event makes me wonder what other crap is "archived" on the Internet if you dig deep enough? Not that this is crap though, I actually still think it's pretty good and the content of the talk is actually relatively amazing, right? Still, it's like a blast from the past - like a postcard from a previous life...

I wrote this blog post a few weeks ago. It's scheduled to be published just as I'm on the airplane, heading back to Sweden from my half year-long sabbatical at University of California, Irvine. By the time you read this text, I will be back in Sweden again.
.
Upplagd av pargman kl. 09:58