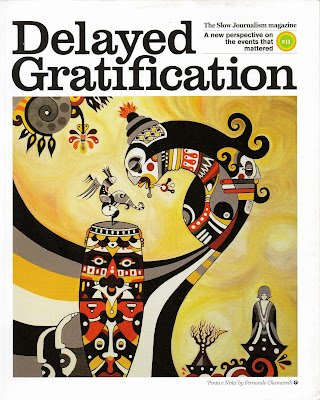 When I heard about The Slow Journalism Company and their magazine Delayed Gratification the better part of a year ago I immediately thought their take on news was a really cool idea. I heard about them in a radio show (podcast) and immediately checked them out on the web. How can you not love a publication with the motto "Last to breaking news"? I think their whole manifesto/sales pitch (printed in each issue) is positively poetic and interesting enough to reproduce verbatim (see below)! I even went as far as trying to get one of the UK editors to give a (computer-mediated) talk in my course about The Future of News / News of the Future this past autumn. He was more than willing to talk, but wanted to come to Stockholm at the same time and it unfortunately didn't work out (a course budget doesn't have the economy to pay for plane tickets or hotel stays). Besides my attempt to invite Delayed Gratification to give a talk, I was personally drawn to this formulation of theirs in particular:

"written by journalists armed with three months' worth of hindsight, and without the albatross of an hourly deadline around their necks. As the weeks and months speed by we are keeping track, picking out the patterns and seeing what is left after the dust has settled. We strip out the white noise and give you the essentials, telling the story of the world over the last quarter."

So, last summer I signed up for a one-year subscription of Delayed Gratification (4 issues, £48 including delivery to Sweden). I have read three issues and while I do think it's interesting to revisit events from the recent past (with a UK slant), I'm not sure I will renew the subscription. The actual writing is ok and it's fine to get a summary of events and persons, but the articles aren't deep enough for me. It's more of a collage than a plunge behind the scenes of some carefully selected events that says something about the world and the time we live in.

Another DG focus is on cool, hyper-designed infographics (see below). That's nice, but perhaps not exactly what I personally am yearning for (or willing to pay for) either. They do however have a cool "infographics vault" where you can check out their infographics and even buy your favourites as posters (52*84 cm).

Even if I don't think I will renew my subscription, I still really appreciate the fact that The Slow Journalist Company and Delayed Gratification exists. They are an alternative to the huge flow of shallow, speeded-up, frenzied coverage of pseudo-events that oftentimes passes for news on TV and on the web nowadays. Here's the DG manifesto - enjoy:

"Print is not dead. For all the wily charms of the digital world with its tweets, feeds, blogs and apps there is still nothing like the pleasure created by ink on paper.
The server farms and all their delights cannot replace time spent in the company of something you can actually hold, whose pages you can turn down and whose spine you can crack.
We believe in magazines that engross and insprire at the end of a long week. We have no interest in creating throwaway media - we want to make something that is treasured, that ends its days making the bookshelf, coffee table or toilet just that little bit prettier and more civilized. And we believe everyone needs a screen break.
Perspective, too, is not dead. Kneejerk punditry, live-blogging and the pounding waves of the 24-hour news cycle have their appeal. But there's also joy in getting your head above the water, sucking in a lungful of clear air and taking your bearings.
This is our starting point. With our belief and perspective we bring you Delayed Gratification, the Slow Journalism magazine. A handsome devil that curates the news and captures the times, written by journalists armed with three months' worth of hindsight, and without the albatross of an hourly deadline around their necks.
As the weeks and months speed by we are keeping track, picking out the patterns and seeing what is left after the dust has settled. We strip out the white noise and give you the essentials, telling the story of the world over the last quarter.
This publication, then, is our flag in the sand - a magazine of records from the editors determined to swipe against the electronic tide.
We're glad to have you with us."