"Books I've read recently" is a recurring topic and here is the previous blog post (same topic, different books). Below are books that I read back in May and June this year. Two of the three books below relate to "future studies". 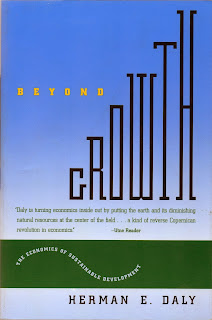 "the United States imports Danish butter cookies, and the Danes import U.S. butter cookies. Somewhere on or above the North Atlantic the cookies pass each other. Surely the gains from trading such similar products cannot be large. But regardless of their size, could not these gains be had more efficiently simply by exchanging recipes?"

I have also never ever before heard anyone argue for thinking seriously about restricting immigration and closing off borders in the name of social sustainability and so as to not encourage a "race to the bottom" that only benefits the very richest in society. I think the following argument is hard to swallow for many modern enlightened persons, but I think it deserves to be heard (which is patently not happening today):

"Humanitarian advocates for the poor [illegal immigrants] often argue that they only take menial jobs that Americans would not take, and therefore cause no harm. I wish it were that simple. But the reason no American will take such jobs is that competition from illegals has lowered wages and working conditions below the acceptable minimum standards. Many American used to work their way though college at menial jobs because those jobs paid enough. Now that is not the case and students have to go into debt instead. Alternatively it is argues that the U.S. unemployed are just not qualified for the new jobs generated by our economy, and therefore qualified immigrants are needed. But if those qualified immigrants were not available we would invest more in raising the quality of skills among our own unemployed."

As a correlative to the term "underdeveloped countries", Daly suggest that the term "overdeveloped country" should be attributed to any country "whose level of per capita resource consumption is such that if generalized to all countries could not be sustained indefinitely". Spot on!

Daly even delivers persuasive arguments that could be used in the struggle over intellectual property rights in our present age of infinitely replicable information (texts, music, movies, games etc.). Daly's point is that current IP laws are quite arbitrary and probably don't even serve their purported social and economic purposes any longer:

"Might there not be a better way to reward creators of knowledge? Prizes? Grants? High salaries? Something that does not require that knowledge be kept artificially scarce? Knowledge is so largely a social product in any case that it is quite arbitrary and unjust to give property rights for minor applications of basic knowledge but not for the discovery of basic knowledge itself. Do the genetic engineers, eager to patent new organisms, share their royalties with Watson and Crick? [...] The early Swiss economist Sismondi noted that inventions motivated by a desire to serve mankind are less likely to be socially destructive than inventions motivated by the desire for personal enrichment. [...] Yet free traders emphasize the importance of strengthening intellectual property rights and making knowledge less and less "the common property of mankind." Their argument is that unless new knowledge is kept expensive there will not be sufficient incentive to produce more of it. But even granting considerable force to that point, I am still inclined to favor the hypothesis that the benefit of rapid sharing of the knowledge we now have is greater than the cost of any consequent risk of slowing the creation of new knowledge. [...] Of all things, knowledge and information are what should flow most freely across national boundaries, and especially form North to South. yet this is what today's free traders least want to be free."

It is ironic that my first acquaintance with Daly, and excellent 2008 New Scientist article called "Economics blind spot is a disaster for the planet" is locked up behind a paywall... You can read the first three paragraphs for free, but you have to pay to read the rest... The book is excellent though. 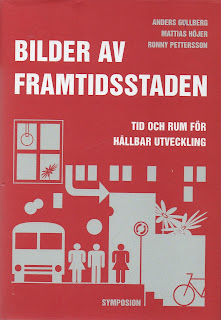 "Bilder av framtidsstaden: Tid och rum för hållbar utveckling" (2007) is, sort of, the end result/final report from a large research project called HUSUS, or "Households and urban structures in sustained cities". One of the appendices contains a list of all the reports that have been published in the research project and contains no less than 45 reports published between 1997-2004 by 24 different (first) authors. The 500 pages long book itself consists of 30 chapters and 5 appendices that have been written by (different constellations of) 14 authors and under the auspices of the three editors (Anders Gullberg, Mattias Höjer, Ronny Pettersson). The book has been translated into English - "Images of the future city: Time and space for sustainable development" - but it is unfortunately prohibitively expensive

The book consists of four parts; 1) starting points, 2) building blocks, 3) images of the future and 4) perspectives on the images of the future. In the second part of the book, building blocks, three different areas are explored:
- Urban structures (i.e. "room"/space)
- Household action patterns and time use (i.e. time)
- Efficiency in terms of different ways of using energy (i.e. technology)

The reason I read this book is very instrumental. I'm working in a research project that Mattias Höjer (one of the editors) leads and it borrows/replicates some of the structures and ideas from the HUSUS research project. There is also an overlap in terms of research methods (future studies etc.) but not at all in terms of personnel with the exception of Mattias himself.

The decision to read this book had very much to do with "work" and very little with "leisure". Some parts were (instrumentally) good for me to read and some other parts were interesting. I especially liked the chapter about "time and consumption". Since the concrete images of the future city primarily are images of a future Stockholm, I also learned a lot about (the history of) the city I live in. 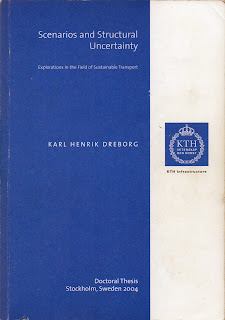 I read Karl Henrik Dreborg's Ph.D. thesis "Scenarios and structural uncertainty: Explorations in the field of sustainable transport (2004) for the same reason I read the book above. I learned more about futures research, which was good, but it would be a lie if I said it was pleasurable. I try to make sure that around one book in ten that I read is a Ph.D. thesis.
.
Upplagd av pargman kl. 19:55