.
Today is the 3rd anniversary of this blog - the very first blog post was written on September 2 three years ago. I've economized the blog posts lately so as to be able to hit blog post #200 (this text) on this very day.

Now and then I write a blog post where the topic of the text is the blog itself. This is such a text and the last time was in the beginning of the year, when I summed up 2012. I also wrote a separate blog post in March about the huge flood of visitors that showed up after a high-traffic blog linked to a specific blog post (it is my most popular text ever).


There is a rising curve in terms of the number of visitors to the blog. Despite this, very very few people comment on the blog posts. If the atypical March visitor flood is ignored (19 comments), less than 20 comments have been written altogether on the 50+ posts from 2013 - and many of the comments are replies that I have written myself. Fortunately, I have found so many different reasons for writing this blog beyond catering to and gathering a huge audience.

Writing blog posts regularly here has, at some point between September 2010 and September 2013, become a way of life for me. So many things, large and small, happen in my professional life. It's easy to forget or to have them all become a blur. This blog is my personal public memory, my way of remembering what I did last week and what I did last year. It's also a way to sum up and keep track of research, academic papers, conferences, books I read and courses I teach. I think it's such a good idea for an academic to have a blog like this that I just can't understand why more people don't? I have and will continue to point at this blog and state that if I get a major research project going, that project would, with this blog as the template, get a blog of it's own!


Looking at the number of unique visitors to the blog, as many people had visited the blog between January and May as in all of 2011 and just a few weeks ago, in mid-August, I had had as many visitors this year as in all of 2012: 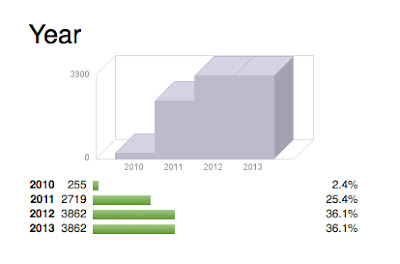 What I find noteworthy is that distances have been abolished with the Internet; the five Google searches above come Australia, Malaysia, United Kingdom, India and Australia again.

The majority of visitors are recurrent visitors though. That means you! Thank you for reading this and other blog posts. If no one ever read anything I wrote about, I would perhaps continue to write but I suspect my level of ambition would sink pretty fast.

Ok, that's enough for now. The two courses I teach during the autumn term both start today and I will indeed be very busy for the next coming six weeks!
.
Upplagd av pargman kl. 12:00