"Books I've read recently" is a recurring topic and here is the previous blog post (same topic, different books). I took a pause in my regular reading schedule during the summer and chose some "easier reading" (no academic tomes, but still non-fiction). Below are three books I read on my vacation and the common theme that binds them together is money and economics. 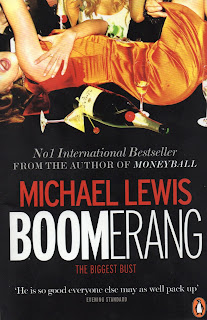 The very best of these three books is Michael Lewis' masterful "Boomerang: The biggest bust" (2011). The book consists of five essays and all of them have previously been published in the magazine Vanity Fair (as well as on the Internet). What can I say - Michael Lewis is a great writer and a great travel companion to the epicenters of the post-2008 financial crisis with separate book chapters covering Iceland, Greece, Ireland, Germany and USA (more specifically California). The crisis played out in different ways in different countries, but the sheer economic and financial madness on display in each chapter is something that all these countries have in common:

"Irish people will tell you that, because of their sad history of dispossession, owning a home is not just a way to avoid paying rent but a mark of freedom. In their rush to freedom, the Irish built their own prisons."

Michael Lewis has described himself as a "financial crisis travel reporter" and no one is better than him at digging up strange stories and meeting up with people who give him the dirt - only to then turn around and tease out meaning and weaving significance on a larger scale from these individual stories. Many of Lewis' stories would be beyond belief - if not for the fact they have all actually happened. Despite having scathing remarks about many forms of financial madness, I think that the Greeks definitely come out worst in his book:

"Individual Greeks are delightful: funny, warm, smart, and good company. [But] no success of any kind is regarded without suspicion. Everyone is pretty sure everyone is cheating on his taxes, or bribing politicians, or taking bribes, or lying about the value of his real estate. And this total absence of faith is self-reinforcing. [...] Here is Greece's version of the Tea Party: tax collectors on the take, public-school teachers who don't really teach, well-paid employees of bankrupt state railroads whose trains never run on time, state hospital workers bribed to buy overprices supplices. Here they are, and here we are: a nation of people looking for anyone to blame but themselves."

Lewis' book provides a fascinating keyhole to the irrationality of mankind that lies behind a sumptuous smorgasbord of financial madness. I had already read four of the five stories on the Internet but still chose to buy the book and re-read them and I wholeheartedly recommend this book! If you are a cheapskate, you can read the articles on the web instead of buying the book. Check out this blog post to find the links to the five stories that constitutes the book. 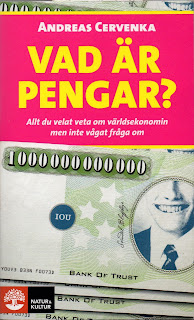 One of my favorite Swedish journalists is Andreas Cervenka at Svenska Dagbladet. I love his weekly chronicles in SvD and looked forward to read his book "Vad är pengar? Allt du velat veta om världsekonomin men inte vågat fråga om" (2012) [What is money? Everything you wanted to know about the world economy but were too afraid to ask]. I did not realize beforehand that the book consist (only?) of his spiced-up-with-graphics already-published newspaper chronicles. While reading the book, I realized that Cervenka is better in small weekly doses than in this book format. His images and metaphors are breathtaking, but when you've read ten in a row you start to notice a pattern. It also seems the book would have needed a little more editing since I several times read that "something unprecedented happened Thursday last week". That works fine in a newspaper but not in a book! The book is still quite good despite these complaints, but I wish both Cervenka and his publisher would have put some more work into this project. 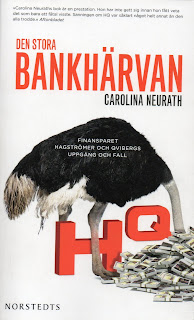 My least favorite economics book was written by fellow celebrated economy journalist (and Cevenka's colleague at SvD) Carolina Neurath. Her book "Den stora bankhärvan: Finansparet Hagströmer och Qvibergs uppgång och fall" (2011) [The great bank tangle: The finance couple Hagströmer and Qviberg's rise and fall] describes the events leading up to the implosion of the Swedish HQ bank in 2010. The book is based on Neurath's newspaper reporting about the scandal at the time as well as on interviews with as many centrally placed persons she could get hold of. I honestly don't remember why I bought this book. It belongs to the category of books that describes the rise (and in this case the fall) of a company - sort of like a biography not of a person, but of a company (complete with an ensemble cast).

I've heard this story so many times before. When the times are good, the captains of industry (in this case Mats Qviberg) think they are geniuses, are afflicted by hubris and drag their companies down the gutter. Here's a summary of this particular story: instead of 'fessing up to some bad decisions and taking the losses, they are swept under the carpet where they - over the course of a few years - mature and start to spread a mighty stink - only noticeable to those who are actually in the building and as apart from the general public (and journalists, shareholders etc.). Finally it all becomes untenable the whole house comes crashing down. Perhaps this book is interesting if you have a keen interest in the business pages meticulously or if you had a relationship to HQ, but I don't and I didn't.
.
Upplagd av pargman kl. 21:19