.
"Books I've read lately" is a recurring topic and here is the previous blog post (same topic, different books). The books below as well as the books in my next blog post are all part of a package of books that in one way or another relates to "community" (and thus partly or fully to sociology). Although not at the center of my research interests any longer, community was after all the topic of my ph.d. thesis ("Code begets community"). I read the three books below approximately between January 10 and February 20. 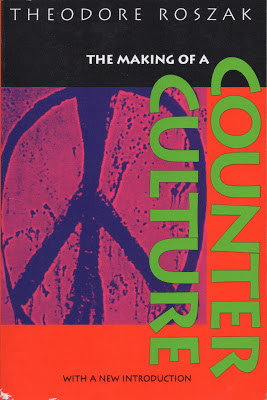 I've wanted to read Theodore Roszak's "The cult of information" (1986) for a long time, but that hasn't happened. My interest in Roszak did not decrease when I heard that he traveled around during the 90's giving techo-critical talks that ended with him smashing a computer to pieces with a sledgehammer. Besides techno-criticism, I have several other long-time interests including the connections between the 60's and 70's counterculture and the 60's and 70's emerging computer/hacker culture (in my opinion best captured in Stone's (1995) book "The war of desire and technology at the close of the mechanical age"). I thus chose to read Roszak's "breakthrough" book, "The making of a counter culture: Reflections on the technocratic society and its youthful opposition" (1969). Unfortunately I cannot recommend it. It was written during, rather than after the fact, and thus documents the 60's counterculture movement and values from within, while it was happening. I guess that is illuminating to some extent, but it also makes the book caught up in things that were important right there and then, but that isn't really any longer. On the whole, the book thus felt dated. The chapters are written as independent essays and although I found some interesting, most weren't particularly interesting to me (who is Paul Goodman? I have never hear of him before. Why would I particularly care about his "visionary sociology" (all but forgotten now) and want to read a 25 pages long chapter about it?). Roszak is on the other hand credited for coining the term "counterculture"! 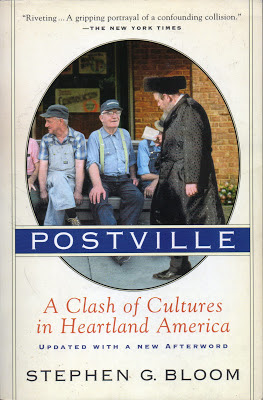 "Postville: A clash of cultures in heartland America" (2000) by Stephen Bloom is a very different kind of book, an eye-wittness account of how two strong, incompatible cultures ("communities") collides at a certain time and place (Iowa in the 90's, see the picture on the book cover above). Bloom, a journalist-cum-journalist professor, writes engagingly about a matter that is close to his heart and based on his personal experiences. It is a joy to read the book from a stylistic point of view. Although I've never been to Iowa, and although I've never know any ultra-orthodox Hasidic Lubavitcher jews, I can still see the scenes with my inner eye and emphatically understand the (incompatible) values expressed by the two cohesive "camps", as well as laugh out loud at Bloom's witticisms and his sharp pen.

"Here was a kind of experiment in the limits of diversity and community, the nature of community, the meaning of prejudice, even what it means to be an American. Postville seemed like a social laboratory, perhaps a metaphor for America."

Since Postville isn't an academic book, Bloom does (unfortunately) not interpret or theorize the events he describes to any deeper extent, but that also makes for an easy read and I can very much recommend the book to anyone who is interested in these topics (community, diversity, (in)tolerance, America, Hasidic jews, rural folks etc.). 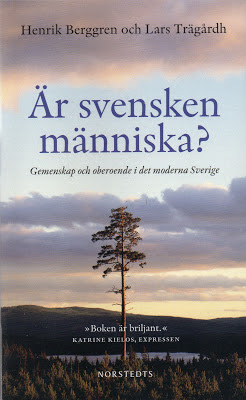 Historians Henrik Berggren and Lars Trädgård have written a book about "the Swedish character"; "Är svensken människa: Gemenskap och oberoende i det moderna Sverige" (2006) [Is the Swede a human being?: Community and independence in modern Sweden]. I thought they have done a very good job of describing "what Swedes are like" and why we are the way we are - although the book is uneven, with some parts being much more interesting than others.

The implications are widespread and are the result of historical and other developments and sometimes (for example in the case of marriage patterns), based on prehistories dating back to the 15th century if not longer. One part of the book treats Swedes view of love (and marriage, family life and the upbringing of children) and my wife, not being from Sweden originally, very much appreciated this part of the book and felt that it explained and answered many questions she had had about Swedes for 10 years and more. Swedes bring up their children to be independent and form their own opinions early, and this is (based on me and her comparing our experiences) apparent already in the socialization of our children in kindergarden. My wife in short felt that the book explained many things she herself had wondered about for years and years, and I guess that is as good a judgement as anything I could write here.
.
Upplagd av pargman kl. 21:58