.
I've never been a big fan of new year's promises, but this year I'm committed to no less than two (work-related) promises and they both seem pretty doable now, two whole months into the new year. These two promises are both spin-offs from the 30-day club at my department that I wrote about on the blog last year.

The first promise is to clean out and organize my room. There are basically piles of papers and stuff on all horizontal surfaces, the detritus of 10 years of "deferred maintenance" and of just shoving a pile of papers out of the way to make room for the next pile. Having to put piles on the floor to make room for new piles was the straw that broke the camel's back. Before Christmas I acutely felt that this just can't go on! 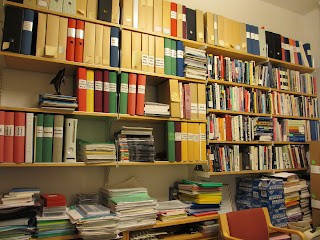 Picture: It's actually worse than it looks. In the cupboards (just below the bottom of the picture) are gigantic piles (2/3 meters) of paper. Piles of varying height also adorned all three of my desks.

Ongoing courses each have a pile of their own with the most recent/important stuff at the top of the pile. This works great and is an excellent way of organizing current courses, but something is wrong when the pile from a finished course just lies around for months and then becomes the foundation of next year's pile for the same course... 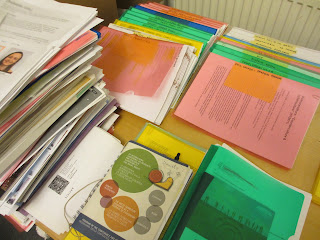 Picture: To the left: a huge pile from a course (containing unorganized contributions from several years back, but with the most recent stuff on top). Top of the picture: super-organized color-coded folders, each containing a separate task that needs my attention at some point during 2013.

More concretely, I have pledged to spend 30 minutes every day sorting though piles either throwing away or organizing stuff - later to be neatly put away in binders. Even if a pile easily can take a week (or two) to process, the very act of spending 30 minutes per day and feeling that the work of organizing years of accumulated backlog progresses in small-but-certain steps is to me similar to meditating. It feels really good to know that I'm taming the piles - despite the fact that progress is not visible from one day to the next for a casual visitor who passes my room by.

As to the rule of spending 30 minutes per day at this task, I already from the beginning decided not to be too dogmatic about it. It seems this promise works out best during those days when I don't have a meeting before 10 and when I thus can spend the very first 30 minutes of the day in my office, sorting things out. I also skip keeping the promise when I'm generally stressed and have a lot of things that needs to be done before I go home. I guess that means I only keep the promise, say, three days per week or so. Still, that's good enough for me. I do believe I will need to make use of the whole year and perhaps be finished with cleaning out my room at the end of the year. If necessary, I might consider making the very same promise also next year.

The second promise it to read more scientific articles. I already have the habit of reading academic books (two+ per months). Scientific articles just don't seem to get read on a regular basis though. So my nerdy solution is to invent a rule (a new year's promise) in order to make it happen. My rule is thus to read 10 pages of academic articles per day and preferably to do this at work (rather than at home, in the evenings).

So every four weeks I add articles up until I get to my goal - 200 pages. I then divide these into four piles with around 50 pages per pile, put each pile in folder and allocate each folder to a week (1-4 during that particular month). Then I read. Afterwards I write a blog post about the articles I have read. I did do this back in April and May as part of my 30-day-promises.

I have by now diligently read articles during both January and February, but I'm behind with writing a blog post each for these two months. Also, during these two months I did not actually manage to reach the goal but have rather clocked in at around 150 pages (i.e. the articles that were supposed to be read during the fourth week of January were transferred to the first week of February instead). Despite slipping, I'm really quite happy about reading more or less one new article per day. Stuff I have wanted to read for a very long time do get read instead of warming yet another pile on my desk (or worse, being lost in one of my many piles).

I believe I will be able to keep this promise during the spring (March - April - May - June), but the autumn is a more uncertain bet. This past autumn I was totally swamped with work and just didn't have the time to read as much as I would have wanted to. This coming autumn will hopefully be better, but I wouldn't be too sorry if I "just" manage to keep this promise during six out of twelve months.