.
"Books I've read lately" is a recurring topic and here is the previous blog post (same topic, different books). I read the four books below between November and mid-December last year. Yep, I'm behind again, but I aim to slowly catch up (with one blog post per month about read books).

The first three books below plug a gap in my knowledge about social movements. I realized that "social movements" was an area that could be of strategic interest to me and did some research on it a year ago. In one of the research grant applications I/we submitted, I wrote:

Within social movement theory (Tilly 2009, della Porta and Diani 2006), the focus of industrial society on economic justice (eg the labor movement) later and within the New social movements extended to include also "post-materialist" values ​​and rights (eg the women's movement, gay rights, environmental issues) (Melucci 1996). ICT plays an increasingly important role in the social movements of the 21st century (Diani 2001, Bennett & Segerberg 2011, Earl & Kimport 2011). How can online communities that are focused on crisis-proofed lifestyles be understood in terms of social movements? How are conflicting demands on organizational identity vs. openness to the outside world, information vs. mobilization, transparency vs. protected sections for members balanced (della Porta & Mosca 2009)? 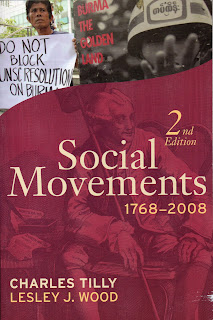 "Social movements: An introduction" (also the second (2006) edition) is written by prolific Italian social movements scholars Donatella Della Porta and Mario Diani. I did finish the book but I found it to be more than just slightly boring. Here are their four core questions for social movement analysis:
- What is the relationship between structural change and transformations in patterns of social conflict?
- What is the role of cultural representations in social conflict?
- What is the process through which values, interests, and ideas get turned into collective action?
- How does certain social, political, and/or cultural contexts affect social movements' chances of success, and the forms they take?

You should probably have grappled with at least a few of these questions before you read the book to be able to appreciate it fully. I had not and so the book didn't really touch me. At all. 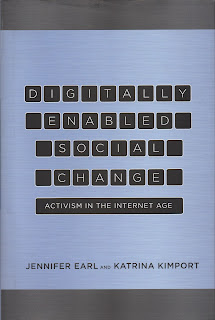 Having read the previous two books about social movements and finding them lacking, I had high hopes for a book with the enticing title "Digitally enables social change: Activism in the Internet age" (2011) by Jennifer Earl and Katrina Kimport. While the book discussed "e-movements", i.e. "movements that emerged and thrived online", the book only treats specific forms of activism, namely "e-tactics", i.e. petitions, letter-writing campaigns, email campaigns and boycotts. I would have preferred to know more about different movements' use of the Internet for mobilizing, but was instead treated with the results of a comprehensive (quantitative) study of a small number of huge "warehouse sites" and a large number of smaller sites with petitions, letter-writing campaigns etc. I have a healthy dis-respect for petitions in the age of Internet after I came across the Repetitionr website a few years back ("Tired of ineffective democratic processes?", "Discover the new click-democracy!", "Learn how to comfortably change the world from your armchair", "Democracy 2.0: Just a click for a million signatures!", "Do-It-Yourself Democracy. A million people can't be wrong."). I created my own petition and lo and behold, I got 50.000 signatures in to time at all. Repetitionr is a real website but it is also the product of an Italian duo of artists who call themselves "Les Liens Invisible" and they do great work of problematizing and poking fun at social media "solutions" (social media absolution?). I wrote about them on the blog two years ago - but the blog was new at the time and only 30 people have read that (really funny and really upsetting) text - so go read it now!

Despite this, I found this book to be the most interesting of the three books on social movements since it was the one book that most comprehensively covered the specific topic I am interested in; social movement and social media (or "activism in the age on the Internet"). It wasn't what I expected or would have wished for but it was still ok. Still, it sort of makes me wonder. Is "writing boringly" a prerequisite for becoming a social movements scholar? 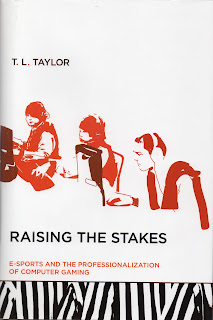 T.L. Taylor's "Raising the stakes: E-sports and the professionalization of computer gaming" (2012) was great! I have recently submitted two abstracts (paper proposals) about sports, computer gaming, programming, competitions and sportification to a conference on sports and another conference on cultural studies and will for sure have a lot of use of Taylor's book when we write these papers. I met T.L. at one of the events (World Cyber Games, WCG) she writes about in the book six years ago and I knew already back then that she planned to write a book about competitive computer gaming, but I didn't know it would take another five years until the book was printed... Also, I attended her workshop "Beyond sports vs games" in Copenhagen a year ago and wrote about it on the blog.

Different chapters in the book treat whether or how computer games can be considered a sport, the e-sport players themselves (the development of an e-sport career), the business of e-sports (teams, owners, leagues, competitions, referees, sponsors) and finally media and spectatorship in pro gaming. The book "asks us to confront our notions about what play, work, and sport are."
.
Upplagd av pargman kl. 17:20