On the many functions of this blog

.
Only ten days about, I wrote a text about academic blogging. As it turns out, I will not give my short intro to my use of, and my thoughts about this blog in December, but rather today. In fact, this blog post is slated to be published 10 minutes into my talk and I will use this blog post in lieu of a powerpoint presentation.

My goal was to keep this text short and sweet, confining it to the list of functions that I originally planned for, or have since discovered since I started this blog 15 months ago. It turned out to be a long list though. And I have kept it relatively short and might write a follow-up to this blog post later, incorporating reactions and new ideas I get from my audience.

- A record, or a diary of my work-related activities. Not all of them, but at least one per week. I have a job that is as varied as mine, something interesting worth writing about must happen every week. Like all those seminars I have attended and didn't take notes from (or did take notes that were never organized and can't be found).

- A way for people to follow me (I had a fuzzy idea about who might want to follow me but I primarily thought about work colleagues).

- A place ("webpage") where I could start to keep track of and collect work- or career-related information (papers written, courses taught etc.). People who search for my name on the Internet should find this homepage/blog.

- When I went to a workshop on "Digital media and collective action" a year ago, I found it useful to write about some highlights and to link them up in the blog. Webpages written down in some notebook are soo much less useful than if they are in a blog post about the event where the webpage was mentioned.

- Later, I also directed a master's student of mine to that blog post and more specifically to some of the links. So the blog is not only a way for me to write things up and/or to allow others to follow me, but also a permanent archive to which I can direct others to specific posts (in this case a master's student, later also a whole class).

- Use the blog to write summaries (and analyses) of students' course evaluations. Writing for others (which I'm supposed to do), who, I suspect don't pay attention or might not even read my course evaluations has never appealed to me. But if I write up the same things in a little freer form and for myself, that's a different thing. Hopefully, others (TPTB) will be satisfied with the contents of such a blog post instead of the more "official" formats (?)

- To to collect three or four books that I have recently read and write a paragraph about each one. That gives my reading a rhythm; I can go back later and see what I read and when.

- During the spring, one of the comments were signed with "Media student, KTH". I hadn't really though about the fact that some of my/our KTH Media Technology students read the blog. It had just never crossed my mind before. That fact opened up the blog to a number of texts that would primarily be written for our students, i.e. blogs where I comment on and analyze our sometimes differing perspectives on higher education (I have such a blog post in the pipe). I have some idea about how many (few) read this blog, but I have little idea of who they are.

- During the autumn, I have also noticed that some other lecturers/researchers read this blog even though I don't know them personally. How do I know? Because that have commented on a blog post and I followed them to their own blogs. So now I subscribe to their blogs and I guess the next step (for 2012?) would be to invite each other or to eventually meet up someplace. They obviously have similar or overlapping interests and are thus be definition interesting for me to keep track of.

- Very usual nowadays is that I write up a blog post and then, directly after it has been published, send of a link to one or half a dozen people I think or I know will be interested in the topic of that blog post. I ask them to give me feedback in the form of a comment on the blog, but that seldom happens.

- I also know that a few colleagues (at least two; Jorge and Hannes) subscribe to and read my blog and this can make some of our meetings very effective. I write about stuff that happens and stuff I think about and they read it - so we can take the discussion from there instead of from scratch. Last month I wrote about the Green Hackathon event that Jorge and Hannes organized. This month Jorge wrote about it in his blog and referred to my blog post. I read his blog and immediately edited my blog post to point back at his text (another first for the blog).

- I also point to this blog as example to encourage others (primarily colleagues) to start similar blogs of their own. I can't say that I've succeeded as I don't know a single person who has picked up this habit... Jorge blogs (seldom) and I follow his blog, but he started before I did. I might ask/demand that a ph.d. student of mine starts a blog for the same (or similar) purposes, asking her to write a blog post once per week so as to help me keep up with what she does that she thinks is interesting.

- The last function on this long list is this blog post serving the double function of entertaining/educating the regular readers of my blog, and as a foundation for tomorrow's talk about this blog.

Some of the functions above are more specialized categories of others, i.e. writing about the books I have read recently is a special case of using the blog as a record/diary, and having students of mine follow the blog is a specialized case of allowing other's to follow me.

As time goes by, my blogging habits becomes more advanced. At first, I wrote about something that had happened during the week. Now, I sometimes check my calendar and in advance pinpoint what this (coming) week's blog post will be about. If I attend some event that will, or might become the blog post of the week, I might directly ("proactively") take notes having that in mind.

A new first is also to strategically write a blog post about something in order to be able to direct specific persons to that text in order to get them to do me a service (I might write about the specifics later).

That's it for now and I'll finish with some info about the blog's readership and popularity.

My first blog post was published in the beginning of September last year and I have since published around 65 blog posts. Almost 75% of those blog posts have been published this year, but more than 90% of the traffic has (this far) been generated this year (2011): 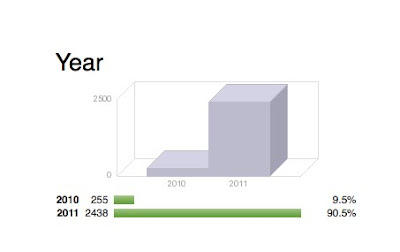 The numbers of visitors are rising, but since this is a low-volume blog, "coincidences" can have a large impact. The huge numbers of readers in April (below) has to do with a specific blog post, and the fact that a high-volume blogger referred to it - sending hundreds of readers this way. To be honest, I don't even remember why I had many visitors in January this year. 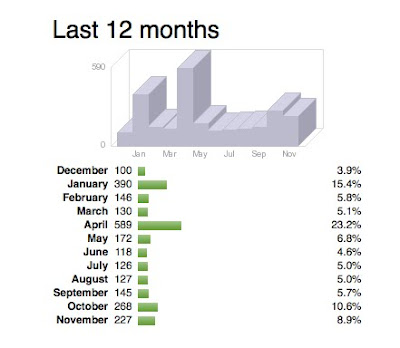 There 11 persons subscribing to the blog though Google reader, but again, I have no idea who those subscribes are, or if there are other subscribers who use other RSS readers... Fortunately, enough of the functions in my long list above does not depend on having (many) other readers, so I don't see that low numbers of readers will be a reason for me to discontinue blogging. Quite the opposite! I find new reasons for blogging that I myself benefit from all the time. The fact that I slowly pick up more readers over time is great, and it will be exciting to see what possible spin-off effects might follow from that in the future.


PS 140419. I just found an article about "9 reasons why running a science blog is good for you". Ha, amateurs, I found 50% more reasons (above) and I could now, 2 1/2 years later probably squeeze out another couple of reasons...