.
This is the fifth time I compile annual statistics about the blog - here are the statistics(1) from last year. One year ago I had published almost 440 blog posts and this is blog post #493. Blog post #500 will be published sometime at the end of this month!

The 53 published blog posts during 2017 hides the fact that I was absent from the blog for more than five months and only published one single blog post between the end of March and the beginning of September. I believe I lost readers during that period and the number of visits in 2017 were the second lowest ever since I started the blog (and 2010 doesn't really count as the blog was brand new and was only up and running for four months). I in fact had less than half the visitors in 2017 compared to my three most popular years of blogging (2013, 2014 and 2016). 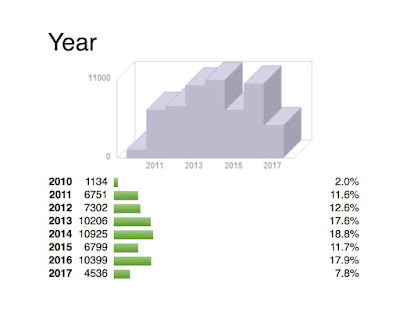 Looking a bit closer at the number of visits during 2017 we see that the numbers shrank during the first half of the year and that it (erroneously) seems I had no visitors at all in December! Most months this year saw 250 to 500 visits to the blog while a normal month last year instead saw 800 to 1200 visits! Or, has seen 800 to 1200 visits one year later - we'll see how many will have read this year's blog posts a year from now... 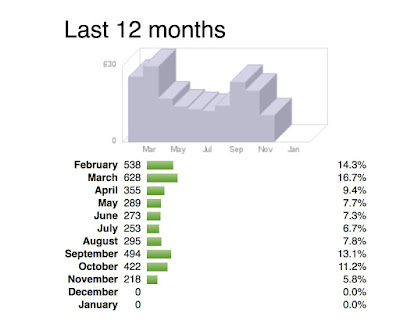 Last year the cut-off limit to make it to the top-14 list was 1080 page loads. When I looked through the 492 blog posts that have been published since the blog started, by now no less than 39 texts have had more than 1080 page loads. The fourteen most-read blog posts in the history of the blog are currently:

My feeling is that by taking a five months long break I lost a lot of readers. Or more to the point, I actually believe a lot of spiders crawling the net dropped my blog during that period. Blog posts that were published between January - March 2017 have been "read" (loaded) 500-900 times on average. Blog posts that were published between September - November 2017 have instead typically been loaded only 100-300 times on average.

While I do know that the blog is read by quite some, it is still (or to an ever higher extent) the case that very few comment on blog posts. Out of the 53 blog posts that were published in 2016, only two have gotten any comments at all. I kind of feel that the conversation is not even happening on Facebook any longer, so I don't know where it happens beyond (the few remaining?) face to face conversations I have. I in fact do know that some people I know read at least some of my blog posts now and then but I rarely find out about. It's almost like it's a taboo - where the latest blog post becomes something not to talk to me about...? Ok, I know I'm exaggerating. It of course isn't a taboo, but my point is that it might as well have been. In both cases I would have as many conversations about the contents of my blog posts (books I've read, seminars, symposia, workshops and conferences I've attended, papers I've submitted or that that have been accepted or presented etc. Strange. Won't stop me from continuing to publish though as I to a high extent do this to keep track of things I do for myself, i.e. my will to write and publish blog posts is only partly dependent on your habit to read these blog posts. See further these two blog post from November 2011; "On academic blogging"(2) and "On the many functions of this blog"(3)!