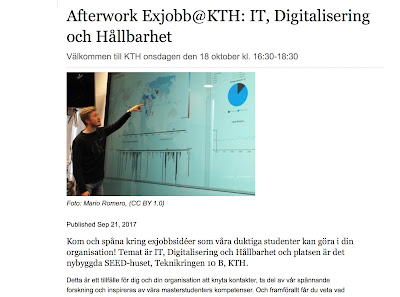 This past week we organized an After Work where we invited companies and other organizations with an interest in 1) ICT/digitalization and 2) sustainability. The basic idea of organizing this event is:
- Our students do their master’s thesis during the spring (January – June 2018). They are good at what they do.
- Companies/organisations have tasks that would be suitable and we want to find sustainability-oriented tasks/thesis topics for our students.
- Companies/organisations do now necessarily know what tasks are suitable for our students, how to formulate a proposal to make it attractive for our students nor know how to get in touch with our students.
- So we (teaches/researchers) organize an after work where we tell them about these things and encourage/help them formulate suitable and attractive thesis topics.

A side effect or organizing this event is of course that we widen our general network (beyond the specific task of together defining master's thesis topics). We organized a similar After Work a year ago for the first time and back then I wrote:

"I think the idea is ingenious and there are quite a few reasons also for companies to have engineering students do their thesis work with/for them. But many companies don't know exactly what a master's thesis entails, how to put together an attractive offer, at what time of the year to do it as well as various other practical issues."

There were however some significant differences between this year's event and last year's event:
- Last year's even was held on November 9, but that was a little too late. Many students are starting to look for thesis topics right now and there will be an initial information meeting for our masters students next week. This year's timing (AW on October 18, info meeting October 25 and 26) was thus much better.
- Last year's timing also happened to be terrible due to the surprise snowpocalypse that disposed more than half a meter a snow the night before the event - crippling local transports in Stockholm. Many couldn't get to work and at least half of those who had signed up didn't show up due to transportation-related difficulties. Last year's event also happened to be held the day after Donald Trump had been elected president of the US.
- Last year's even was officially organized by the School of Computer Science and Communication (basically my colleague Elina and me), by the research center CESC (which paid for snacks and the room) and by the School of Architecture and the Built Environment (who helped man the event). This year's event was organized by the same entities as well as by the strategic innovation program Viable Cities.

As part of the program for the After Work, we invited a student who has just written a master's thesis (during the spring) to present it and talk some about the process of writing it. Last year we had Robin Chanapai talk about his thesis (I was the advisor). This year we had Sofie Nyström talk about her just-finished thesis about visualizing waste management practices in the Swedish grocery chain COOP. While I wasn't her advisor, she did her thesis within a research project that I lead together with Cecilia Katzeff and I also accompanied her to two of the interviews. Also Sofie, Cecilia and me are currently writing a paper together that is based on her thesis.

Elina and me planned the event and I think the program was great. What could be improved is the marketing of the event. It's a pity that only a dozen or so guests turned up when we could easily have entertained twice or three times as many. I think we will have to be much better and mention that we organize this event every year in October throughout the year rather than just in the run-up to the event. Despite the half-hearted turnout I still think the event is great and I choose to regard this year's After Work as a practice round for next year's After Work!
.
Upplagd av pargman kl. 21:36