.
My last blog post summarized my academic output in terms of texts that I have been working on during the 2016 autumn term (July-December). As apart from the previous blog post - which treated only texts from the second half of the year - this blog post is a summary and an analysis of all the text I worked on last year.

Here's a top-level breakdown of the 31 texts I have been working on during 2016:
- 19 conference papers
- 6 journal articles
- 2 book chapters
- 2 workshop proposals

For more information about the contents and the status of individual texts, see the blog posts about the texts I worked on during the first half and the second half of 2016. As apart from my previous meta-analysis (from half a year ago), I have this time around enhanced this blog post by graphically representing a number of important aspects of my text production (explained below). 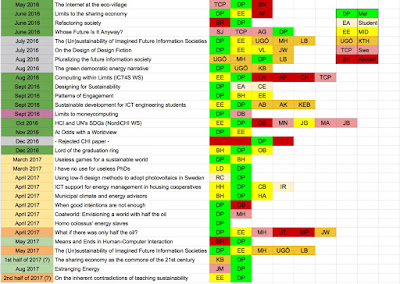 The second column is of course title of each text. The first column describes both when the text was (or will be) presented and the color designates the current status of the text (see my previous blog post about the color-coding). Columns three and on list the number of co-authors, their initials and their institutional affiliation, e.g. me, students at my department, colleagues at my department, colleagues at my university, people at other universities in Sweden and people at universities abroad.


Observation 1: I am the single author of only one single text - all the other 30 texts have co-authors. Of those 30 text 12 have two authors (me and someone else), 7 texts has three authors 4 texts have four authors, 3 texts have five authors, 2 texts have six authors, 1 text has seven authors and 1 text has 15 authors. The two workshop proposals generally have numerous authors (six and seven respectively).

Observation 2: I'm the first (main) author of 13 out of 30 co-authored texts and the second author of another 14 texts. That means I either drive the process or I support the person who drives the process in 90% of the texts that I have had a hand in during 2016.

Observation 3: I have worked together with my colleague Elina Eriksson in 11 out of the 30 co-authored texts. Other frequent collaborators are Björn Hedin and Ulrika Gunnarsson Östling (four texts each), Mattias Höjer, Luciane Borges and Teresa Cerratto Pargman (three texts each), Karin Bradley, Josefin Wangel, Mikael Höök, Adrian Friday, Oliver Bates and Barath Raghavan (two texts each)

Observation 4: Of the 11 texts that I have been working on together with Elina Eriksson, we are together the first-and-second-authors of ten of these texts (first authorship being almost evenly split between us). We work closely together and I expect us to continue to do so now that Elina has gotten a permanent position as an assistant professor at KTH.

Observation 5: Of the 31 texts I have worked on, at least 90% are about sustainability in one form or another. Only one text touches on computer games - the topic I was most interested in ten years ago, (before I saw the light and switched my research in a more sustainable direction).

Observation 6: Almost all the five texts that were rejected are or will being reworked and resubmitted in 2017 and that's also true for the one text that was withdrawn. One of these texts was in fact written, submitted, rejected, reworked and resubmitted in 2017 and it has now been conditionally accepted for presentation at a conference in May 2017. That text appears twice in the list above - once as rejected (July 2016) and once as conditionally accepted (May 2017).

Observation 7: Of the 31 texts listed above, "only" 11 have, at the end of the year, been presented at conferences or are published in journals. That means that almost all of the other 20 texts will return in a future follow-up blog post (half a year or a year from now).

Observation 8: There are a lot of texts in play at the moment. There are also texts-in-the-workings that have not yet yielded any concrete outcomes (have not been submitted anywhere). There is a very high chance that the number of published/presented texts in 2017 will be considerably higher than 2016.

Observation 9: Only one single text is written in Swedish - my native tongue. I'm Swedish, I live in Sweden, but hardly anything of what I write professionally is written in anything but English.
.