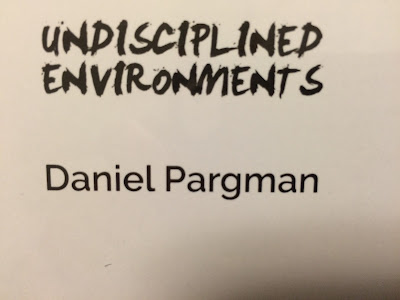 My previous blog post treated a panel I participated in (on automatization, digitalization, and the possibilities for a just future society ) at the conference "Undisciplined Environments". I did not have the opportunity to attend the whole three-day conference except for the last day of the conference (Wednesday). These are my impressions.

The conference was organised by the European Network of Political Ecology (ENTITLE). I have to admit that I'm not exactly sure where political ecology as a subject (discipline?) comes from and I assume it's one of these hybrid topics much like "Cultural Studies" (see this blog post about my impressions and analysis of a cultural studies conference I attended back in 2013. According to Wikipedia, "Political ecology differs from apolitical ecological studies by politicizing environmental issues and phenomena". Rather than read up on Wikipedia pages or surf the web, I have instead ordered an introductory book about political ecology (that was recommended at the conference).

The day started with two keynote speakers, one of which is listed as a "prominent contemporary scholar" on the Political ecology wikipedia homepage, Nancy Lee Peluso. She talked about her results from anthropological studies in Indonesia, including migration of womenfolk to become maids in Hong Kong and sending sizeable remittances back to their families who uses the money to buy cows and build permanent residencies inside a nation park (!).

Nancy finished her talk by stating that migration (not to be confused with people fleeing and seeking asylum) will be the crucial question for the 21st century. I then asked a carefully worded question about a possible connection between her studies and issues of population (Indonesia has doubled its population from 120 to 240 million inhabitants in the last 40 years but has also had drastically falling fertility rates) and the status of that issue (population) in political ecology. She rejected the question outright and stated that "overpopulation is a complete smokescreen". I presume she meant that we shouldn't talk about (over)population as long as we in the affluent global North over-consume and as long as the distribution of resources and power is so skewed (she for example mentioned that a tiny handful of people own as much as the billion poorest on the planet). What was interesting was that people in the audience (hard to gauge how many) applauded her (non-)answer to my question. I don't have enough background knowledge to know exactly how to interpret her answer and the situation (the applause). I can understand that she/political ecology might consider other questions more important, but she didn't say that but rather just rejected the question outright. Perhaps (over)population is a taboo in political ecology? I hope to find some answers in the book I ordered but can also imagine that it won't be raised there either (if it's a taboo).

My own position is that while us living in the global North obviously over-consume and while Western lifestyles obviously are unsustainable and should be scaled down significantly, the not-quite-so-affluent and the poor are not exempt from making bad decisions, including striving for and trying to emulate western lifestyles and consumer patterns. Also, I can't understand how migration can be a question of outmost importance while population isn't even on the table. Here's an example. Syria had 22 million inhabitants before the civil war started. Upwards to half the Syrian population has been displaced and has moved either inside the country or to (primarily) neighbouring countries. But 25 years ago, there only lived 12 million people in total in Syria and 45 years ago there was only a little more than 6 million people there. It seems hard to discuss the civil war and the many millions of displaced Syrians with no reference to the fact that Syrian had a population that has increased by a factor of 7 since 1950, has a partly desert and partly semi-arid climate and that Syria has suffered from a multi-year drought proceeding the civil war. But I can understand that hard facts like these can be painful to contemplate since they raise difficult questions but provide frightfully few answers.


The rest of the day I attended three sessions. It was hard to choose since there were always around 10 parallell sessions to choose from. But it wasn't so hard to choose the first session:

Although the sessions supposedly was about "Southern Europe", it was actually all about Greece (and Cyprus). The first two talks were (pretty detailed) case studies and of limited interest to me since they did not generalise much beyond their specific cases. The last talk was great though and I later invited the speaker (ph.d. student Aggelos) to lunch to continue the discussion. I now also await the arrival of a paper (a book chapter) that he promised to send to me.

Aggelos comes from Greece but is a ph.d. student in Barcelona, Spain and he had some interesting reflections when it came to comparing these two crisis-stricken societies. Greece is a society with a severe deficit in social capital. People don't (have never) had faith in the Greek state and they don't as a rule trust strangers. They do instead trust and depend on their (extended) families. Spain (and perhaps especially Catalonia) is much more oriented towards cooperation.

I wanted to know how the crisis of 2008 and its ongoing aftermath has changed peoples' values and perceptions. The answer was that "it is complicated". Greek society has definitely been radicalized in the wake of austerity policies and after the last election(s). Unemployment is high (30%), youth unemployment is much higher and there are lots of grassroots initiatives to provide people with the basics. Greeks currently have Chinese salaries and Chinese standards but also the Euro and European prices. It is hard to enact changes on a political (state) level and a more fruitful strategy (both in Greece and in Spain) is to cooperate with authorities on a local level (much like the Transition Town movement advocates).

While people have moved beyond denial ("it can't be true, things will be fine again soon"), few people have reached acceptance ("this is the new normal"). This is partly because things are still in flux so there is no "new normal" as of yet (something that I hadn't really realized before). Aggelos discussed the emergence of social clinics, working cooperatives, local currencies and soup kitchens in his talk and these can of course be seen as ways to adopt to an emerging "new normal", but the internal economical and political problems have lately been overshadowed by the refugee crisis which has underlined that the future is very uncertain and that anything can happen. One of the speakers said that she plans for the next 6 months but that it's impossible for her to plan for the next two years as there are just too many uncertainties multiplying on a "longer time scale".


The second session concerned Challenges and Tensions in Scenarios of Energy Transition and it was the fourth session on "Political Ecologies of Renewables".
Gabriel Weber : The Green Economy Zeitgeist and Environmental Conflicts – The Political Ecology of Germany’s Energy Transition.
Lise Desvallées: Energy poverty “coming out” in Catalonia: exploring the social consequences of Spanish energy transition policies.
Daniela Del Bene: Hydropower Expansion in the Himalayas: Community Resistance in the Era of Consensus of (Energy) Technology

Lise's talk about energy poverty was the most interesting to me. One definition of energy poverty is that you spend more than 10% of your income to buy energy. Lise mentioned that an energy bill of 60 Euros is a lot of money if you earn only 400 Euros per month - which apparently quite a few people do in Spain and Portugal. Energy prices in these two countries have doubled between 2000 and 2015, primarily because of the transition from fossil to renewable energy sources.

This talk raised a lot of questions to me about the price of energy (primarily electricity). Is energy cheap or expensive? How much energy do poor people use in absolute terms - does it "cost a lot" only because we/they use a lot? Energy is on the one hand very inexpensive from a historical perspective but on the other hand a substantial expense for people who earn little. So should (inexpensive) (clean) energy be seen as a human right? One thing is clear though and that is that high energy prices sparks social movements and protests but it was hard for me to understand if people primarily protested against high energy prices, against inequality, against the capitalist system or all of the above.

The last speaker in the session seemed to be very well read (degrowth, radical ecological democracy, appropriate technologies, intermediate technologies) but what was most interesting to me was her reference to a conference, the 11th International Conference of the European Society for Ecological Economics (EESE 2015) at the University of Leeds and where all the keynotes are online. There are several interesting speakers there that I would like to listen to!

The last session I attended was a presentation and discussion of [the book] "Degrowth: A vocabulary for a new era". The discussion was interesting enough for me to order the book. Despite having been at the third International Conference on Degrowth, Ecological Sustainability and Social Equity, I still feel that I have not come to terms with what the degrowth movement and its theorisers are all about. I understand that degrowth is very different from the "negative economic growth" that Southern Europe has experienced in the aftermath of the 2008 financial crisis, but I have a hard time understanding exactly how they have shaped a positive vision of the future out of less. Some hastily scribbled down notes states that degrowth critiques of the ideology of growth, that degrowth is a hypothesis for something new that implies a smaller "social metabolism" (materials throughput) and that degrowth stands for the equitable downscaling of production and consumption.

I believe in all those things too, but there is one important point where my view and the degrowth view seems to differ significantly since they forcefully reject a world view of limits as formulated by the Limits to Growth report (1972) and especially by Thomas Malthus/Malthusianism. Panelist and conference organiser Giorgios Kallis stated that political ecology has been critical of Limits to Growth (and Malthusianism) from the very beginning. That extends to a critical stance towards peak oil and, I suppose, also of the concept of Ecological Footprint (and of Earth Overshoot Day). They seem to want to move from terms like limits and scarcity to abundance, of us having enough of what we need to live bountiful lives if we share what we have more equitably (which would also rule out compatibility with World Systems Theory). I also understand that degrowth theorists see the term scarcity as "external" and instead want to shift the perspective and the discourse to overcoming "internal" (social, psychological) limitations. We should embrace internal limitations and realise that they will lead to better lives and a more just society/world. I have to admit that I don't "get it" but I am still intrigued (while sceptical) and want to know more. I should also add that I'm not sure all panelists agreed on this radical reinterpretation/annihilation of the term "scarcity".

I'm really keen to understand the degrowth/political economy position towards limits and scarcity since they, in their rejection of Limits to Growth, are in good (bad?) company with the techno-utopians and the singularitarians - despite probably not having anything else in common. All in all the conference left me confused, but on a higher level. I look forward to learn more and hope the two books I've ordered will help me. One last note is that the last panel is also where I first heard about a related (to either political ecology, degrowth or singularitarianism...?) line of thinking called accelerationism.
.
Upplagd av pargman kl. 22:56