.
The first blog post of the year looks at some blog statistics - for the third year in a row (here's last year's blog post). The last time I wrote a meta-blog post (a blog post about the blog) was when I published my 300th blog post three months ago - right after the fourth anniversary of the blog. This is blog post 320. 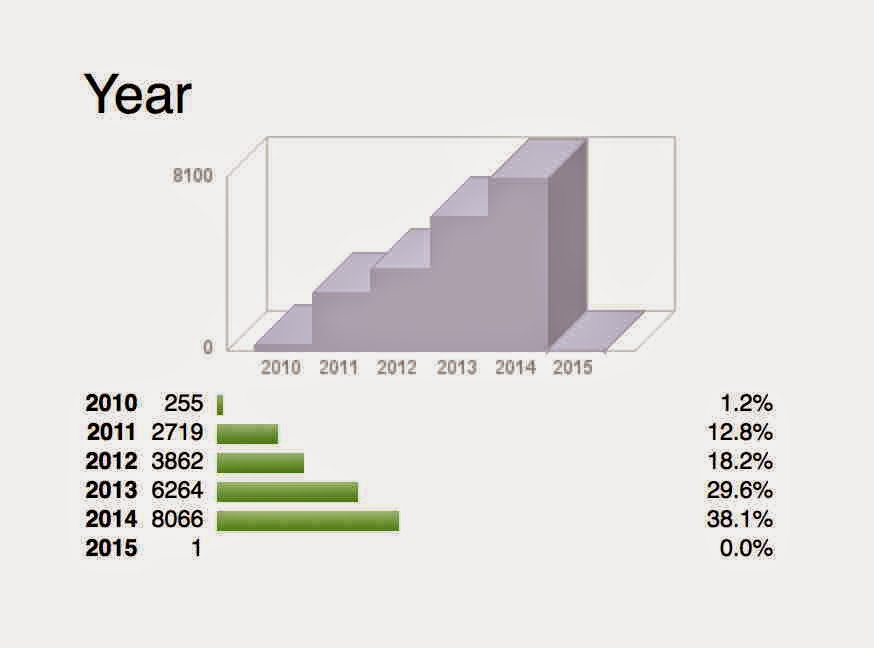 This blog was started 4.5 years ago but close to 40% of all visits happened during the last 12 months. My hypothesis last year was that Facebook drove traffic here since I had then just started to write Facebook status updates with links to the most recent blog post. This year it instead seems like a lot of the traffic on the blog comes from Google searches (more on that a little further down).

The twelve most-read blog posts in the history of the blog are currently:

Last year's cut-off limit to make it to the top-10 list was 400 page views. When I now looked through the 319 blog posts that have published since the blog started, this year no less than 27 texts have had more than 400 or more page views, so I decided to extend the top 10 list into a top-12 list. It is interesting to for example note that a blog post like "EIT ICT Labs" was number 6 on last year's list, but despite rising from 490 to 689 views still didn't make it to this year's list (is was number 15). The number of page views necessary to make it to the top-10 list has risen from around 200 two years ago, to 400 one year ago and 775 right now.

This time around I thought it would be interesting to have a look at the bottom of the list and see if I could discern any patterns at "the bottom of the barrel". These are the least read blog posts since the blog was started:

A year ago I wrote that:

Of the 55 blog posts that had been read 200 times or more, no less than 16 blog posts (7%) have been read 500 times or more. What this goes to show is that there is plenty of traffic to "older" (pre-2014) blog posts. That might sound good but I'm not sure it is. I instead have the feeling that fewer people follow the blog and read the latest blog posts compared to a year ago (even though I nowadays always "announce" new blog posts on Facebook), and that more people find their way to a particular blog post through a Google search. The typical reader might thus be shifting from a regular "reader" to a random "visitor" who pays a visit to the blog exactly once and reads exactly one blog post. That would further mean that the number of visitors to a higher extent will depend on the vicissitudes of almighty Google which is a little worrying. Another sign that reading patterns are changing is the fact that commenting reached a new low during 2014. Only 6 out of 83 blog posts had any comments at all.

That doesn't look too bad, but I on the other have to jump all the way to the end of September to find the first blog post with more than 100 views. It didn't use to be like that only a year ago and it thus seems that traffic to the latest blog posts are sliding while traffic to the blog as a whole increases. I would furthermore presume that that traffic to older blog posts will be very unevenly distributed with some blog posts acting like "magnets" while many others will languish. I'm pretty sure my very popular blog post about Airbnb will continue to draw many visitors to the blog.

Something I find fascinating is that blog posts about "books I have read" can become quite popular. There are almost 40 such blog posts and I write more than ten new each year. The very most popular of these blog post was published earlier this year and it has been viewed more than 450 times (probably because I write about Guy Standing's book "The Precariat"). Another such blog post has more than 425 views but more than 75% of these blog posts actually has had more than 100 page views. Perhaps I get visitors to these blog posts through the Swedish online bookstore Adlibris which I link to and which links back to my blog posts. That's where I usually buy my book.
.
Upplagd av pargman kl. 20:07