.
Now and again I write a text about (academic) blogging and about this blog, but last time that happened was more than a year ago and so I think it's time for an update.

As can be seen in the picture below, the number of unique visitors increased during 2012 by more than 40% compared to 2011. That might sound impressive, but as the number of published blog posts increased by 35% (from 54 in 2011 to 73 in 2012), the increase in number of visitors/blog post wasn't that fantastic. There are, on the other hand no less than 20 subscribers right now (up from 11 subscribers 14 months ago). I think that's a lot! I presume most of these 20 subscribers are people I know personally - care to leave a short comment below telling me who you are? 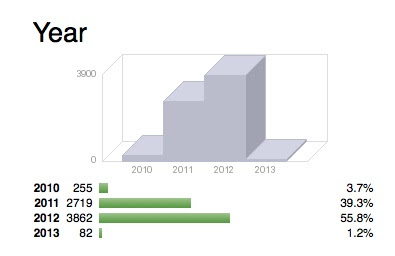 Readership figures are fun to delve into, but I don't and indeed never have written in order to get a large following. I write about those things that I want to write about (stuff that begs to be documented, that I want to be able find later, things that bug me and so on - see this blog post about the many different functions of the blog). If there are many people who are interested in reading what I write, fine. If there are fewer, that's fine too. I anyway hardly expect anyone to read each and every blog post from the beginning to the end. There has though been a general rise in number of readers, for example rising four month in a row between July and November (see below). I have also started to link to the blog on Facebook and expect some of my Facebook friends to drop in here now and then.

I was very busy in December and only had time to write three blog posts, and I haven't written anything during the three weeks proceeding this blog post. There are in fact a few things that happened in December that I plan to write blog posts about now, in January. 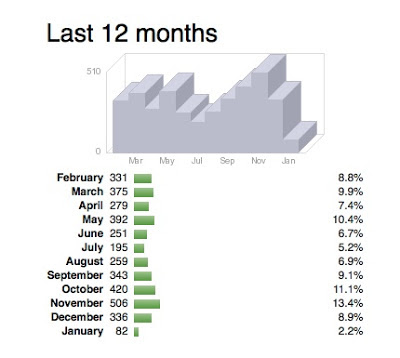 I've looked through the statistics and there are naturally a huge variations in the number of readers for each specific blog posts. The rule is basically that if I write about something that is of interest to many people (for example students currently taking the course that I'm writing a blog post about), I will immediately get 50-100 visitors. If I write about a topic that is of interest to people "out there", on the Internet, some will find it through Google searches and drop in to read a specific blog post (and continue to drop in over time). A few blog posts has gotten a lot of visitors because some other, more high-traffic site, has linked to the blog post. Only removing the very first blog post describing what this blog is about (which currently has been read almost 1600 times), the distribution of visitors to individual blog posts look like this, i.e. a totally normal power law distribution: 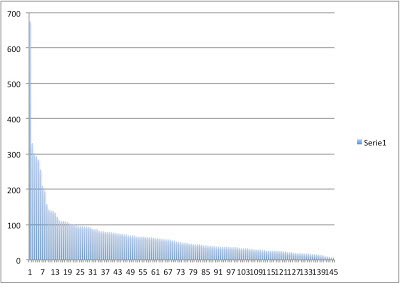 All in all I am super-content with the blog and will continue to write at least once and at the most twice per week also during 2013. I would probably continue to write blog posts even if no-one else read these texts. Which you fortunately do. So thank you for reading, because had I been the only reader, I would just jot down notes instead of writing more reader-oriented texts.

The one big weakness of the blog is the commenting function which 98+ % of my readers seem to not have found yet... There is a total of 74 comments all-in-all on the 147 published blog posts...  and even a minority of the most popular blog posts have garnered any comments. And I furthermore guess that at least a third of the comments are answers to previous comments that I myself have written! In fact, even as the number of readers increase, there seems to be less commenting over time and of the last 33 blog posts (published during the last 6 months), only four have been commented at all! I think there is room for improvement here from you, dear readers!
.
Upplagd av pargman kl. 13:04