"Books I've read recently" is a recurring topic and here is the previous blog post (same topic, different books). I'm finally starting to catch up with writing about the books I've read recently - as apart from books I read "some time ago". I read the book below in February and March. All three books below are about sustainability and all three are edited books with collections of texts. 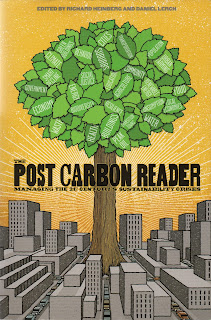 Heinberg and Lerch's "The post carbon reader: Managing the 21st century's sustainability crises" (2010) is published by the Post Carbon Institute, an American think-tank and non-profit organization "leading the transition to a more resilient, equitable, and sustainable world". They have around thirty experts ("fellows") in their stable and many of them have written chapters for this book, ranging from climate and culture to economy and education (and much in-between). The quality of the texts are high and several texts made a big impression on me in this hefty (34 chapters, 450 pages long) book. It's difficult to say something about an edited book since it collects many diverse voices on many different topics, but I very much recommend this book. A major part of the book (30 chapters!) is available online - enjoy! 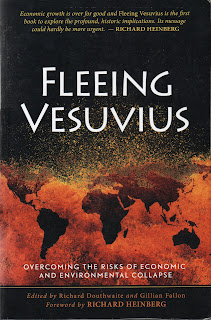 Douthwaite and Fallon's edited book has a great title, "Fleeing Vesuvius: Overcoming the risks of economic and environmental collapse" (2011), but does not live up to the level set by the Post carbon reader. This book is put together by another think-tank, the Irish Foundation for the Economics of Sustainability (Feasta) who aims to identify characteristics of a truly sustainable society and then to articulate and promote its implementation. Editor Douthwaite (a co-founder of Feasta) died half a year ago. Unfortunately, the quality of the texts are mixed, and a few were not very good. What furthermore irritated me was that it was hard to find a focus and a red thread as some texts treated big, global challenges, and other texts treat a (very) specific project. Some texts treated issues mostly of interest to Irish readers and perhaps of less interest to others. The texts were also of varying length (ranging from 5 to 30 pages) and the impression I got as a reader was that book was fragmented, and that some texts should have been rejected. Perhaps the core idea of the book should have been communicated better to prospective authors so as to get a more cohesive end result! 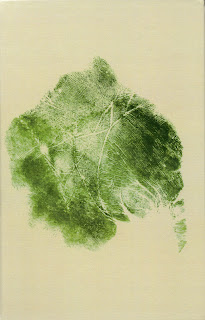 Finally I read Kingsnorth and Hine's edited book "Dark Mountain (Issue 1)" (2010). The Dark Mountain Project is a strange beast, "a network of writers, artists and thinkers who have stopped believing the stories our civilization tells itself. We see the world is entering an age of ecological collapse, material contraction and social and political unravelling, and we want our cultural responses to reflect this reality rather than denying it." The Dark Mountaineers are "beyond environmentalism" - they have stopped believing the world can be saved and that (climate- or other human-imposed global) disasters can be averted. So they mourn, but they also try to find reasons to rejoice and find happiness in a world heading in the wrong direction. This book was even more eclectic than "Fleeing Vesuvius", but it never attempted to be anything other than a literary experiment. Beyond (quite different) texts (essays), it also contains fiction, drawings, poetry and photos. The quality varies, there were a few great texts - for example editor Kingsnorth's own text - but let's just say that the recently-printed Volume 2 and the soon-to-be-printed Volume 3 hasn't made it to my to-buy list. Another quirky detail was that you could only pay for the book with a PayPal account (which I don't have, so it was kind of a hassle - but this might have changed since I bought the book).